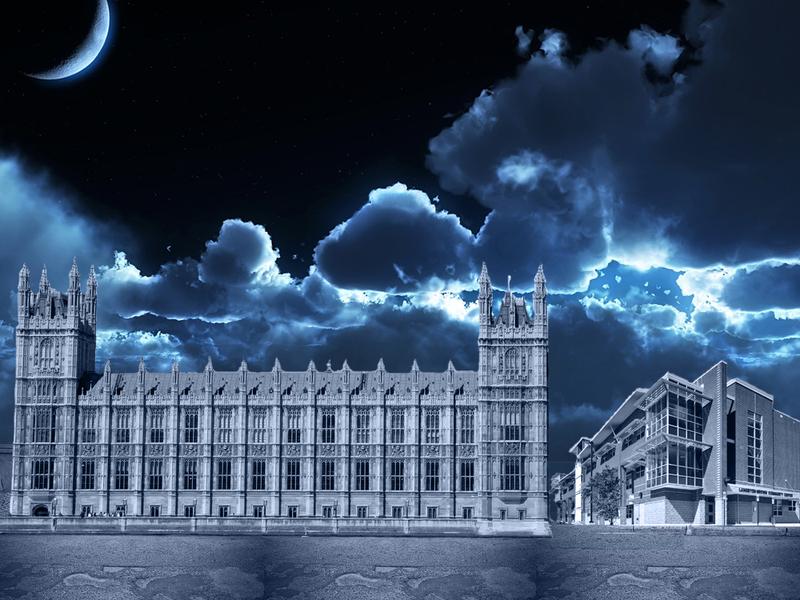 Short story * Dancing in the night

I wrote this short story as part of a friendly writer’s challenge. We used the cards of the Tarot Arcana and allowed ourselves to just come up with anything. I got to write the first chapter, and this is it. No professional editing, just the sheer fun of imagining other worlds and stories. I do hope you enjoy this youthful bit of fun.

He was wondering how he had ended up where he was right now. The sun shone through the dirty
window, making all the little dust particles dance above the ledgers on his desk. Was this to be his lot in
life? Adding and detracting numbers in books, that no one in his right mind would ever want to read?
Truth be told, he was good at it. Better than good even, he was one of the best. But that didn’t mean he
loved what he did. Damn it, he didn’t even like it much. Being an accountant isn’t exactly what boys
dream of when they grow up. It’s also not great for attracting the girls. Quite the opposite, in his
experience.
So, for the hundredth time that day, his eyes drifted toward the little dancing particles and he dreamed of
freedom. He was better than this, surely? Just because he never made any mistakes, and could hold all the
necessary numbers is his head, didn’t mean that he had to sit all day in here?
Here, was the little cubbyhole of an office on the back of the third floor of the prestigious accounting firm
of Jensen, Dudssen and Mayflower c.s. And it would take him at least 5 additional flawless years to
manage to get a similar room to work in on the second floor. Not to mention how long it would take to
actually getting a room with other accountants in it, a street view or, pray to the heavens, meeting a
customer! No he would be in here six days a week from eight in the morning until seven in the evening,
just to get paid.
So he turned his eyes back to the ledger and started jotting down little numbers in the correct columns.
Dreaming about freedom was one thing. Contemplating what to do with his days and nights after work
was finished, was even worse than accounting. He could dream all he wanted, that didn’t change the cold
hard fact that he had no home to go back to at night.
Oh, he owned a house. A rather nice one in a more or less respectable neighborhood. But that didn’t make
it a home. The furniture was the same as his parents used to own. Exactly the same. He had only added a
strong, if unadorned, bookcase to hold his study books and the occasional ledger he took home, when he
had to work extra hours. But there was no life to the place. He lived alone without even being able to
keep a potted plant alive. So best not mention what happened to the goldfish or the little grey meowing
fur ball he had adopted so long ago.
His employers, being an accountants firm, were quite anal about rules, habits and traditions. So
traditionally every worker showed up at exactly five minutes to eight and went home exactly five minutes
past seven. So it had been on his first day at work and so it would be on his last. He counted back to how
long ago that first day was again. And his mind drifted again to the dancing particles. It must have been
nigh on fifteen years ago. He must have been fifteen or sixteen years old at the time, he wasn’t sure. Back
when he still had a life worth the name. He was so proud that he had been chosen from all the kids in his
class. He knew he had his math teacher to thank for it, but he was the best and he knew it too.
He had never stopped to wonder why a firm like Jensen, Dudssen and Mayflower c.s. actually went into
the projects to find promising kids with a good head for numbers. Why, he had worked so hard to make
something of himself and now the chance presented itself to reap the just rewards. Finally, life was
looking up. His parents were so proud of their only son. Even Susie from the baker had locked eyes with
him and winked. And everyone knew what that meant! He had been too shy to do anything about that and
now no girl ever winked at him anymore. And painfully, inexorably his mind wandered to that fateful day
almost one year ago. He tried to steer his thoughts away, but this time the memories took over and
drowned him. Oh, if only they could do that for real. Drown him. That would be…
… ‘Stanley Gulbrechtsson!’ Was that really Mr. Dudssen standing there in the doorway to his office?
Calling his name? Thrilled he sprang up and to attention. ‘Yessir! How can I be of service?’ ‘Follow me’
was the curt and not very friendly reply. Mr. Dudssen led him downstairs to his own roomy office on the
first floor, looking out on the small, but flowery garden at the back of the old, stately building. It was
quiet in the office, no traffic sounds were discernible, even though the building was located on one of the
busiest thoroughfares of Mrywinther. In his memories Stanley even smelled the magnolias outside the
window, but that could just as well be a fervent wish for the smell of his favorite flowers as an actual
memory from that day. He never could tell.
Inside the office was another of the firms clerks, but one Stanley had never seen before. His face had a
faint translucent grey sheen to it, but was otherwise rather unremarkable. ‘Mr. Gulbrechtsson will do’ said
Mr. Dudssen to the clerk and he waved vaguely at Stanley. ‘Follow me’ the grey clerk whispered and,
without waiting to see if he followed, led Stanley out of the room towards a staircase. It was a staircase
which opened onto the main hall of the central landing, but one that Stanley had never noticed before.

It was dark and dusty on the steps on their way down. The steps were well worn, but still gave the
impression of not being used very often. Far below ground level, they reached the bottom of the stairs.
Stanley could count very well, but somehow never knew how many steps or floors they had passed on
their way down past numerous halls and office doors. The grey clerk preceded him to almost the last
door on the left. The carpet on this floor was at least thirty years old and almost worn through. It was the
kind of big pink floral pattern his mother had liked, from when she was young.
The room was an accounts office, just like his one up the stairs, only the shelves were filled with only
black ledgers, with silver printed numbers on the spines. The numbers would be like a customer number, a
year and a sequencing number. He even recognized the books starting with number 68931, his customer,
the realty merchant. But he was pretty sure he had never even seen these ledgers at all. Surely this wasn’t
what he thought it was? But the grey clerk interrupted his frightful thoughts, by telling him he would
work in this room from now on, and if he would just be so good as to follow him again.
Too confused by his pride at being spoken to by one of the big bosses and of being shown an obviously
important, if somewhat shady, part of the firm, Stanley followed without asking a single question. The
clerk brought him to the last door of the hallway, neither left nor right, but straight ahead and showed him
in. ‘This is Mr Cusslesworth. The “c.s.” in the name of the firm.’ said the clerk by way of introduction.
‘I’ll leave you two to it then’ and he left the room rather hastily. As if he had been there too once, and still
wasn’t fond of any memory of that moment.
‘Welcome Stanley’, spoke Mr Cusslesworth in a warm, deep, rich voice. ‘Would you please take this
seat?’ he asked, waving slightly at the simple chair opposite his shining mahogany desk. Stanley felt his
legs take him to the chair and sit him down. All the thoughts in his mind, about this unknown partner in
the firm, the lack of light and the strange metallic smell in the air evaporated when Mr. Cusslesworth had
started to speak. And Stanley could only watch and listen.
‘I founded this firm a lot of years ago.’ he spoke. ‘And over the years we have built quite a name for
ourselves. We have helped businesses and business rise to power. But we have also the knowledge to
destroy them. Most of it is stored on these floors below street level. It is a rare honor indeed and a sign of
our trust in your, ehm, qualifications, that you are shown the source of our fame.’
Stanley noticed now, with growing concern, he could not move at all. Breathing didn’t present any
problems, but everything else, from scratching his itching nose, to asking the slightest question was, well,
out of the question. Mr Cusslesworth continued: ‘We know you have few relatives in the world. None of
whom are alive anymore. We made quite certain they weren’t.’ This puzzled Stanley, as he remembered
kissing his mum this morning before going to work and walking part of the way with his dad.
‘We will give you a choice today. A choice to acquire power beyond belief. And the time at which to
enjoy this power at your leisure. Unfortunately, this will mean working underground for the rest of your
years. Your choice of friends will grow rather limited, though I must say there are plenty to choose from.
And you will work rather different hours from what you are used to. But those are minor inconveniences,
compared to the rewards. Those being a good long life and as much wealth and power as you can dream
about. And we do know you dream about both. A lot.’
This was the point where Stanley finally remembered the rumors about his firm. About the cellars and
double entry bookkeeping. About clerks working late, till after sundown. About how no one knew just
who they were, but were certain they existed. And finally, Stanley grew afraid. So this was why a
prestigious firm recruited accountants from the projects. Young people no one would miss.
‘So,’spoke Mr Cusslesworth again ‘Do you accept my very generous offer, to one such as yourself?’
Stanley found his voice worked again and started screaming ‘Noooooo!’ At which point his voice stopped
working again. Just like that. His last bit of memory was of Mr Cusslesworth heavy perfume cloyingly,
but not completely, masking the strong smell of metal issuing from his body. And of his whispered voice
close to his ear ’….well… a man has to eat, doesn’t he?’
He opened his eyes, sweat beading on his forehead and running down his spine. Again. He really, really
had to stop daydreaming, he thought as he went to the bathroom. He splashed some cold water on his
hands and face. Looking up, his eyes confirmed in the mirror what he tried to forget every day. He saw
his grandfather in that mirror, even though his eyes were hazel instead of blue. Just as his eyes
are…were….used to be…whatever.